WHAT’S NEW IN THE ERA OF DIGITAL TRANSFORMATION 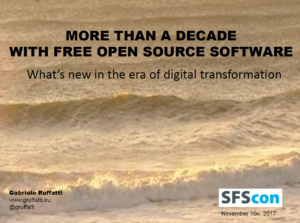 [This is the transcript of my talk given on November 10th, 2017 at the SFSCon ‘17. The Italian text is available here] 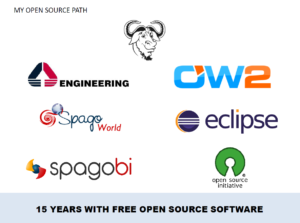 I’ve been walking the open source path for a long time. I first adopted free software, and then moved to open source solutions, always looking at freedom of software as the key value. I was Open Source Director at Engineering Group, I founded the SpagoWorld initiative in 2004 (you’ll probably know SpagoBI, one of its best results), I was Director of OW2 for ten years, associate member of Eclipse, corporate sponsor of Open Source Initiative.

This 15-year journey allowed me to learn how the open source community operates, to enter a wide network of contacts and experiences, to act in a multivariate and international context. 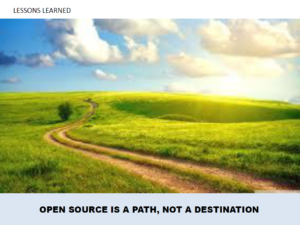 Along the way I’ve learned many lessons.

First one: free open source software has to do with people and companies. While on the one hand people embrace principles and values like ethics, trust, freedom, on the other hand companies are driven by business following their “animal instinct”. Two different approaches implying two different ways of adopting and integrating open source software.

Second lesson: even though open source is a key ingredient, adopters often care more about usability, integration and innovation. Therefore, what we need is not a variety of open source projects that do exactly the same thing, or do it slightly better, but real innovation that is the key driver for open source adoption.

Third lesson: complexity matters when we talk about open source: integration, licenses and compatibility, governance, community life. And at this time management of complexity is something that has to do with the ability to understand and act.

Fourth lesson, the most important for me: open source is a path, not a destination. It produces collective benefits that are more valuable than personal benefits. It reinvents relationships and business dynamics; it gives access to a wide network of contacts. It’s a path littered with values and ethical principles. You mustn’t skip to the end of the path, but walk the entire path. This means being a driver for change. 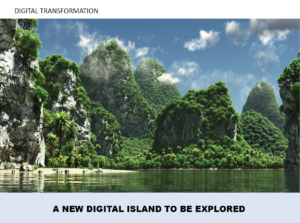 Now let’s have a look at the future, focusing on the role that the open source software is going to play. The new challenge consists in facing the digital transformation era. This implies a radical change.

We have just landed onto a new “digital” island, leaving the “analogic” mainland behind us. We are now on the seashore: there’s still a lot to explore, to create. 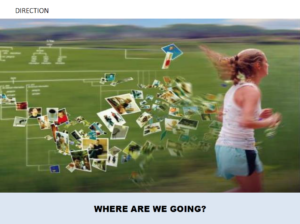 Many people say: digitalization is unstoppable, it’ a matter of velocity, isn’t it? Actually, the matter is not the velocity of the transformation, but its direction. So where are we going? 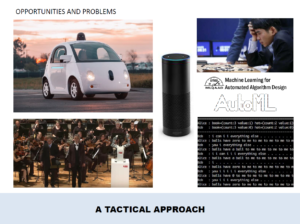 Here you can see a well-known list including both real improvement and jokes: voice-enabled everything and virtual assistants, autonomous cars, robots acting various roles including orchestra conductors, bots interacting with a new language and machine learning software capable of learning algorithms from scratch or designing new ones on their own. It’s a way forward to experiment and create something new with the side effect that we complicate known problems including standards, security and privacy.

But this is just a tactical approach. We are not facing the real challenge!

WHAT ARE WE DOING WITH AI? 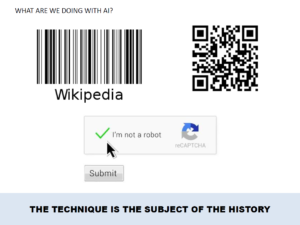 Let’s focus on Artificial Intelligence. As a matter of fact, we humans have realized virtual “spaces” designed for robots, and now we are supposed to take actions on the basis of behaviors they suggest or were designed for.

Let me give you a couple of examples. The QR code is the evolution of the linear barcode: while the second can be integrated with information understandable by humans, the first one is readable by machines only. Or again, think at when we’re creating a new account on a website or making an online payment, and we must prove that we are not robots through recaptcha systems…

We’re facing a revolution.  Actually, for many centuries humans were at the center of the world, of their history. But not anymore. Today the “technique” is at the center of the universe, of our history.  Here the technique is not “a means to an end”, but “the end itself”.  And to reach this end, the technique simply aims at efficiency, and consequently removes anything that is redundant, unusual, … in other words it removes humanity. According to the technique, “what you do” matters, not “how you do it”.

We have new ethic problems to solve. For example: who is responsible for the technology outcomes? Many of you got this answer at least one time in your life: “it’s the computer fault”. We are starting to get this new answer: “it’s the algorithm fault”. Moreover, who is responsible for any unexpected effect that had not been predicted?  You see, we are entering the era of non-predictable effects. 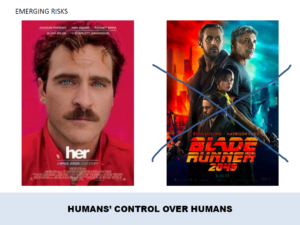 It’s been a long time since I’ve seen Her, a very nice movie where the main actor interacts with an operating system falling in love with “her” (yes, it’s a sexed operating system).  Most of the scenes are about science fiction, but you can see many foresights. You can see many possible technological improvements in the near future, and something is happening right now. Today Artificial Intelligence researchers are really working on emotional AI.  On the other end Blade Runner is totally Hollywood fiction. 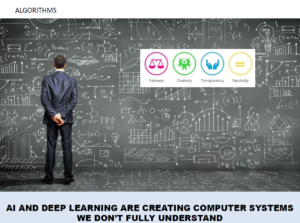 We have many examples of this before our eyes. Discrimination towards females or ethnical minorities using data with no direct reference to gender or ethnicity in job applicants’ forms for initial screening, or algorithms used to predict future criminals, or again qualifications for credit loans.

Algorithms are generally black-boxes. They are closed. We don’t know how they work. Artificial Intelligence and Deep learning, the new emerging analytical technique, are creating computer systems that we don’t fully understand. A responsible answer is to design for fairness, diversity, transparency and neutrality. We need transparency and public control. A lot to learn from open source!

TRADEGY OF THE ALGORITHMIC COMMONS 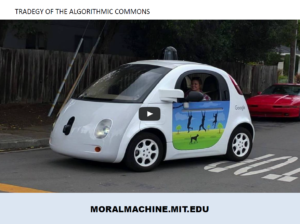 Letting algorithms take decisions on our life can lead us to a dilemma. For example, the autonomy given to machine intelligence can result into situations where it has to make autonomous choices involving humans. For instance, self-driving cars, when the brakes fail, may keep going and hit the pedestrians (and save passengers inside the car) or, on the other hand, crash to a barrier affecting all passengers (and save pedestrians). It’s a moral decision made by an algorithm.

Moral Machine is a platform for building a crowd-sourced picture of human opinion on how machines should make decisions when facing moral dilemmas. We don’t have “the answer”, but, by the end of last year we got more than 5 million responses given by more than 1 million people. Discussion is open and we need time to get this far-reaching solution. 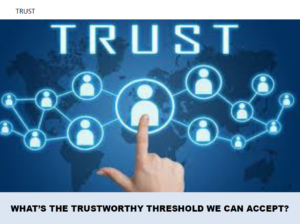 The first question that we’ll have to answer in the future is not whether we must trust someone or something, but: what’s the trustworthy threshold we can accept? 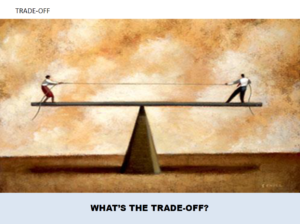 When we don’t have choices? See the Moral machine example. An ethical dilemma has been transformed into a social dilemma. Now the question is: What’s the trade-off? 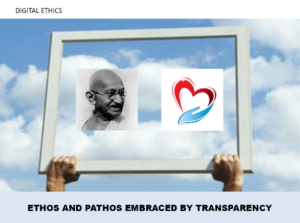 Digital ethics is becoming an emerging topic. We can define it as a system of values and moral principles to conduct digital interactions among people, business and things. Here the role of open source comes. We can use some old Greek language meaningful terms.

First one is ethos. Ethos refers to how you live, how you act. It leads to reputation: a key value in open source.

Second one is pathos: hearts are more important than minds!

Ethos and pathos embraced by transparency. A lot to do and spread for open source communities again! 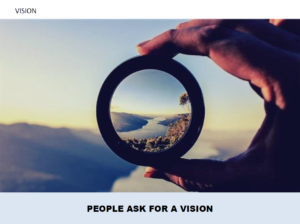 Now I’m approaching to conclusions and I want to provide you with some food for thought.

First suggestion is: give people a vision. They ask for a vision, they need a vision. Give them a vision. I see a great potential here for open source communities, activists, new hackers in spreading principles and values of open source across the digital transformation era. 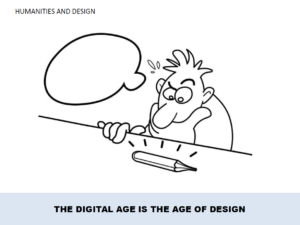 Second suggestion. We are entering a new era in which technical acumen must be balanced with creative insights. That flows from the study of humanities along with technologies. We must, and must encourage people to, trust other people, be free, be empathetic, think deeper, be mindful, design better.  Humans design models that algorithms follow and prepare their data training sets accordingly. Humans, not algorithms or software, have ethical abilities.

In this new era we have a lot of “ingredients” at our disposal. The digital age is the age of design, instead of creation.

Let’s not repeat the mistakes that we made with the internet (at that time open source was playing a key role). As a matter of fact internet was developed by businesses growing with no rules and, nowadays, we are facing the resulting issues every day. We are still exploring the consequences of these choices. Have we really learned the lesson? Now it’s time to approach the digital transformation by design. The digital system must walk on two legs. We must put side by side the social/political leg (I mean: the ethical leg) and the business leg that is now developing Artificial Intelligence, as it previously did with the internet. 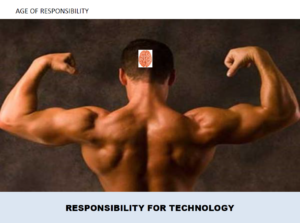 Technology gives us the enormous potential to build our future provided that we put it to good use. We must build a culture of responsibility for technology so that future men will not be all muscle and no brain. The set of values and principles offered by open source can really play a crucial role here. I hope this will come true in the near future. 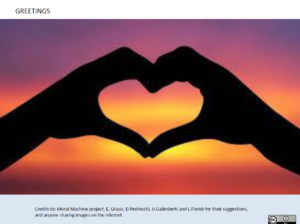